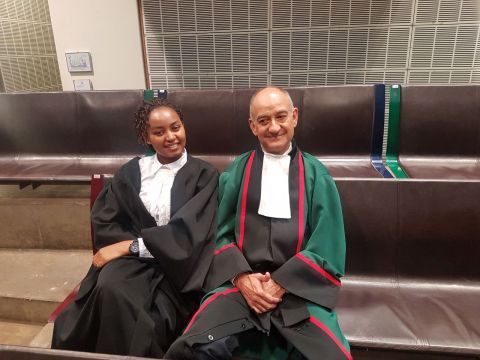 The African Law Clerks Exchange Programme was established through the Constitutional Court Trust, to facilitate the exchange of clerks between the Constitutional Court of South Africa and courts in neighbouring countries and further abroad.The purpose of this bilateral programme is to promote constitutionalism, facilitating an exchange of jurisprudence, and sharing the South African legal experience with neighbouring countries and elsewhere in Africa, in order to strengthen the rule of law and judicial independence.

This programme has its origins in a internship project undertaken between July 2007 and December 2009, whereby the Trust employed four students from Swaziland, Zimbabwe and Kenya who were final year Masters students at the Centre for Human Rights (University of Pretoria) to clerk at the Constitutional Court. This initial project was funded by the Flemish Government.

Based on the success of the project, the Trust decided to source funding to run a pilot exchange programme from 2014, whereby four officers employed and nominated by the Kenyan judiciary would be hosted at the Constitutional Court in Braamfontein, and four South African law clerks who have completed their terms at the Court, would take up reciprocal positions in Kenya.

Inbound officers are employed as law clerks and share in all the responsibilities and opportunities offered to clerks of the Constitutional Court of South Africa. This involves active participation in researching jurisprudence, hearings of the Court, deliberations, and the writing of judgments.

This programme will form part of the broader initiative currently underway in support of constitutionalism and human rights in Kenya, and aimed at providing some of the skills and experience necessary for the success of constitutional democracy in that land.

This programme has, to date, been generously funded by the Ford Foundation, the Open Society Foundations and the Bertha Foundation.

THIS PROGRAMME IS CURRENTLY ON HOLD AND A NEW CYCLE WILL LIKELY OPEN IN 2021, SUBJECT TO COVID-19 PANDEMIC DEVELOPMENTS.

Testimonials from Past Exchange Clerks

Past exchange law clerks have generally found their time at the Kenyan Courts to be very rewarding.

“I believe that this is a very positive experience which holds the potential to enhance knowledge and skills exchange between the Courts. I have no doubt that the small steps taken during the formative period will yield remarkable progress in future.” : - Ofentse Motlhasedi, Former Law Clerk to Justice Khampepe (July 2013 - June 2014), Supreme Court of Kenya Exchange Clerk, February - July 2015

“The exchange is of value, not only at the inter-personal level between clerks and judges, but also at the level of making proposals for streamlined processes for the Supreme Court.” - Irene de Vos, Law Clerk to Chief Justice Langa (January – December 2007),  Supreme Court of Kenya Exchange Clerk, July - December 2014

“The experience at the CCSA has shown me that proper structures, information knowledge management and team work is important in ensuring that a court functions properly.  The Judges are the leaders of the team and any decisions made needed the final approval of the Judges.”: - Emily Kinama, Former Law Clerk from Supreme Court of Kenya; Exchange Law Clerk at the Constitutional Court of South Africa; January - June 2015

“Experiencing new culture. Working in a place where there are very effective systems. Having wonderful chamber mates. Working for a Judge who was very engaging, patient and a great teacher. Learning to do things which I have never done before.”: - Emily Njiru, Current Law Clerk at the Supreme Court of Kenya;  Exchange Law Clerk at the Constitutional Court of South Africa; January - June 2018

“It is an eye-opening experience that helps one to understand that there’s much more beyond their home country jurisprudence, culture and everyday life. Beyond the work experience one gains, it is also a way to build character as one encounters different challenges in a host country, including language barrier, cultural differences, and one learns to cope with these realities.” - Lynette Oyugi, Current Law Clerk at the High Court of Kenya; Exchange Law Clerks at the Constitutional Court of South Africa; January - June 2018